On Sunday the weather was too nice to waste sitting inside. Funny how the mid fifties feels warm after a week of cold rainy weather.

First up we had to run to an open house to pickup our season passes at Tyrol Basin. The pass pickup went a bit slow for the boys, waiting in line is not much fun. We got our pictures taken and passes printed out and headed out to check out the gear sale. Since all our gear is only a half season old the deals on snowboards, while tempting, will have to wait a year or two. Kevin did score a pair of boarding pants for 25% off. Zack who did not get a season pass or any new gear didn't strike out, he got to go in the bounce castle they had setup while I waited to pay for the new pants. Of course being Zack he had such a good time he came out with a bloody nose. We decided to skip the chairlift ride since it would require getting out of the sale area, which was a pain, exactly like leaving Sam's Club only slower.

I don't recall how we came to agreement on a picnic lunch and geocaching at Devil's Lake but once home Jen packed a snacky lunch and I made sure we had caches loaded in the GPS. Jenny told Kevin to grab his camera which was a good thing or we would have been stuck with cellphone pictures yet again. 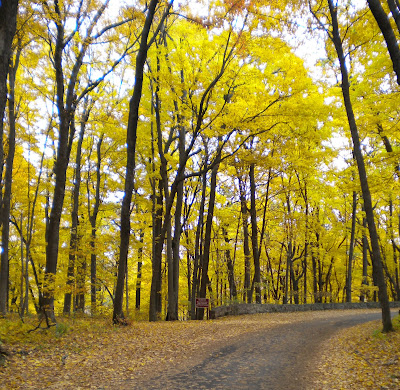 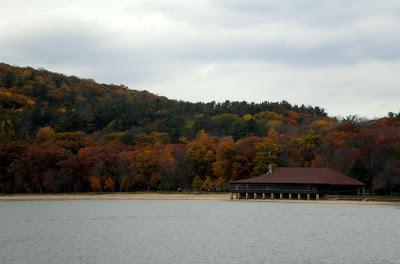 Devil's Lake is a great park in the off season. The trees still had pretty good color and Kevin took a bunch of good pictures when his mom wasn't borrowing his camera. Not only did Kevin have his camera but a tripod as well making group shots much easier. Even if I had remembered our camera I always forget the tripod. We picnicked at a table far enough from the main parking lot we were pretty much alone. Up next was the geocache. I had three programed but the boys didn't want to walk real far so we headed to the closest. We had been stumped by this particular cache once before, the GPS would change the heading repeatedly as it did again. The rocks we were climbing on were somewhat wet and covered in wet leaves making it a challenge. Jenny eventually found the box hidden in the rocks and Zack grabbed a toy car while she signed the log book. 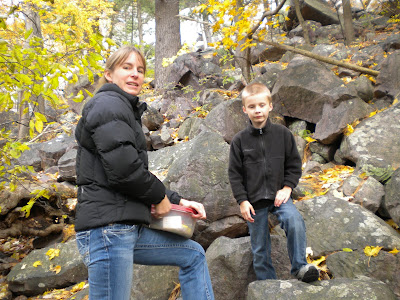 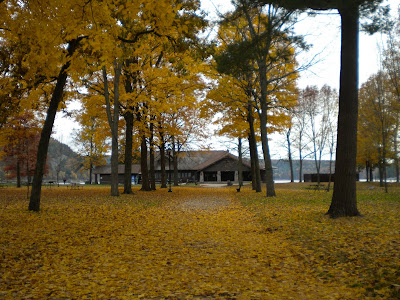 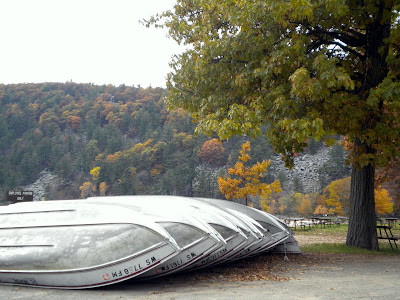 I had seen a farm market advertising apple cider doughnuts so we had to stop on the way home. A good way to wrap up an unplanned trip that we all enjoyed.

The doughnut can be found about here:

Just catching up on life lately. Seems like I've been either real busy, or maybe just real lazy.

Chad and I went to the Badgers game last Saturday. They lost, but the weather was nice. We have gone to games before when it's been raining, snowing, or maybe even worse. The sun was out for most of the game and it was a windy day but most of the wind didn't seem to make it into the stadium. We always have good seats in row 28, season tickets from my parents. And our section is right next to the student section so we don't miss out on any of their cheers with expletives, and they always seem to have a new one each year when we go. 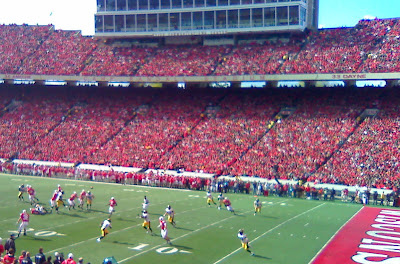 After the game we rushed home to get the boys to take them to a pumpkin party at our CSA farm. We have bought a share of vegetables the last two years from Middlebury Hills. At the end of the season they have a day to go cut pumpkins out in the field, followed by a fire and warm soup. On arrival to pick up the kids, Zack was sick and couldn't go. Kevin didn't want to get pumpkins without Zack, so home we went.

Then it rained pretty much the whole week, at least it seemed like all week long. Chad even ran into snow on Friday driving to Minnesota. No snow at home, but plenty of rain and wind through the night.

Saturday morning we woke up to no more rain, and the sun peaking through. The roads were starting to dry, so Chad and I headed out for a run. It was not too bad running on the bike trail and we actually got so warm running that when we stopped for coffee and a snack at the coffee shop we ate outside. It must have been in the 40's and the chairs were still wet from the previous rain, but it felt good. We shared a wonderful piece of Linzer Torte. 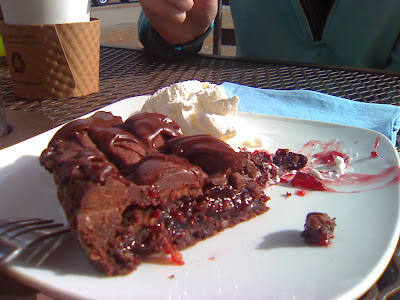 Then Chad had a skull with walnut brain, and I had a blueberry cup. 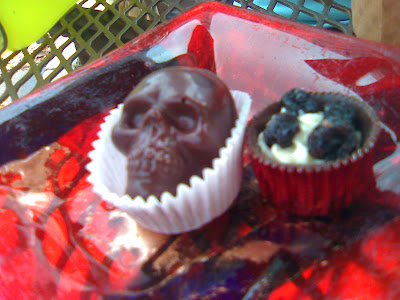 We did cool off on the walk back home, but had our coffee with us to warm us from the inside out.
Posted by Jenny at 6:59 PM

Sometimes bike work is fun and rewarding I'd do it for a living if it paid better and then there is the other times. This last build I was asked to do left me frustrated and disappointed.

I was asked by a friend of Jenny from the fire department to build a mountain bike from two parts bikes and a bunch of leftover parts. I'd rebuilt his old road frame last year when Dan from Atkins recommended me. That build was easy compared to what I was facing this time. 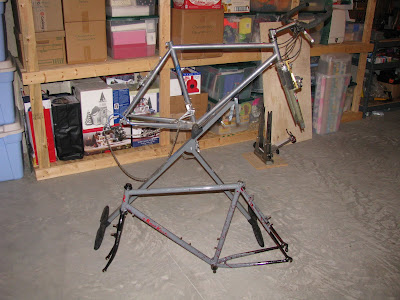 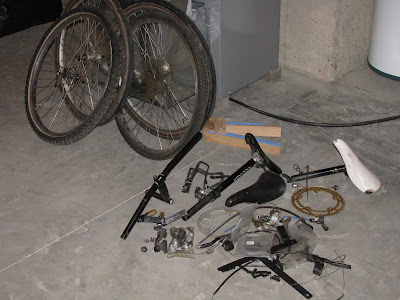 A pile of parts...could be scrap metal.

At first he wanted a single speed then after riding both my single speeds decided on a 1x7 setup. Once I had all the parts in the basement it was a strip and swap operation since the frame he wanted had the more abused parts. The headset needed to be cleaned and greased, the bottom bracket stayed after the left cup refused to break loose. Yeah I could have got it out but this was to be a economy build so no point in wasting labor time to swap in a marginally better one. Everything went together alright and a liberal application of PBlaster got the freewheel and rear derailleur moving again. The new chain seemed good but once out for a test ride it skipped in the two smallest cogs, a quick swap to the chain that had been running on the freewheeling had it running smoothly.

The crankset had minimal clearance at the chainstays but seemed fine, road crank on a mountain frame and bottom bracket. The only mountain crank I had seen was cracked and was awaiting a weld job by a mutual friend. 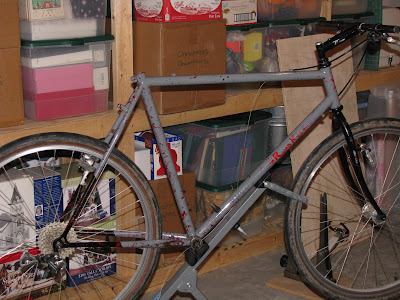 This is the last shot I took before the fun was over.


When I called to have our friend come get the bike I thought I was done finally. So he shows up hops on and throws the chain off the crank by shifting four gears while cranking as hard as he can. It is instantly clear why the parts are all beat up. Next he has issue with the crankarm clearance at the chainstays. By this point I wanted the bike gone so I pulled the crank swapped pedals and the short chainring bolts so once welded the mountain crank would be all set. Twenty wasted minutes to gain a millimeter.

Maybe I'll get lucky and the next person who wants a bike built won't expect miracles.
Posted by Chad at 10:11 AM

How many gears does your bike really need ? This is a subject I've spent many hours thinking about and researching gear charts on the Internet. Yes sometimes I don't have much to think about and thinking about bike parts doesn't cost me anything... for a while anyway.

The stable of bikes at our house range from single to 30 gears. I like the singles for the drive train simplicity but not so much for hills. The real debate in my head is more about crank sets, single , double, triple, I've even seen quads.

I ride a triple 52/42/30 I have no interest in a double or a compact double. The standard double doesn't go low enough for hills with a standard cassette and the compacts spend too much time cross chained.

I spend a lot of time in the 42 which has lead to me the idea of pairing a single 42 or 44 with a mountain cassette, likely a 11/34. I find I frequently double shift the rear already with my 12/26 so the bigger gaps with the mountain cassette wouldn't bother me. A look at a gear inch calculator shows that a 44 tooth chain ring with a 11-34 cassette provides the same range as my triple missing the only highest and lowest gears.

So equipment wise I'm thinking a single ring crank, new mountain rear derailleur and cassette. I'd get to delete the front shifter and derailleur. I might go to a bar end shifter for the rear as well to make matching brake levers easier. This move would be for simplicity not weight savings, my bike builds tend towards durable over feather weight.

I'm not sure when or if this will get done but will update if it comes together.

Sheldon Brown's Gear Calculator this is where I compare setup options.
Posted by Chad at 7:28 AM

So I went for a ride today since the weather is suppose to get worse all week, that isn't to say today was ideal unless cold is your thing. I ended up doing about 39 miles since my choice of layering wasn't working. I was warm but sweating from my not breathable enough jacket worn over a Pearl Izumi Kodiak Light jersey and a long sleeve base layer. I have yet to buy a long sleeve jersey that is comfortable below the mid fifties without at least a light base layer. I'll be jersey shopping for Christmas. I'd like to find one that would work down to the mid thirties without a jacket.

I didn't take the camera since there is almost no color to be seen yet out here. Instead I was concentrating on what gears I used. I'll have a separate post regarding just how many gears are really needed to get a useful range. For some great photos of cycling and a good read check out this blog: The Path Less Pedaled

All the cold weather has left little weekend activity to write about. So here is what we hope to get done yet this fall.

Jenny and I are doing the World Wide Festival of Races this weekend at some point, the 5k this year. We just got fliers in the mail for the Berbee Derby which we ran last year and will be again this Thanksgiving.

The Bombay Bicycle Club ride this Saturday ride was to be a family affair but the fore casted high of 45F will be too cold I'd guess. I'm holding out hope for one more kayak paddle to see some fall color.

I guess if all else fails we can go hiking until Tyrol Basin opens after Thanksgiving.
Posted by Chad at 5:01 PM