Trip up the Blue Mounds Hill

Woke up this morning and felt like going on a bike ride.  I was able to talk Zack into coming along with Chad and I as long it was to his favorite biking destination:  Blue Mounds tower.  He likes to bike the bike trail to the Blue Mounds State Park and up to the top of the hill.  At the top is his choice of two towers to climb, one on either side of the mound. 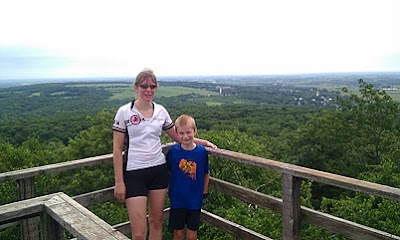 Later in the day, after everyone was cleaned up, we headed into Madison for errands and supper.  We ate at Ian's on State, probably our favorite pizza restaurant.  Slices allow each of us to pick a different flavor, and their salads are customized with mix-ins and dressings applied at the requested strength.  After supper, we took a walk around the State Capital.  We spotted some baby rabbits snacking on grass about 4 feet from the sidewalk.  They were so cute... 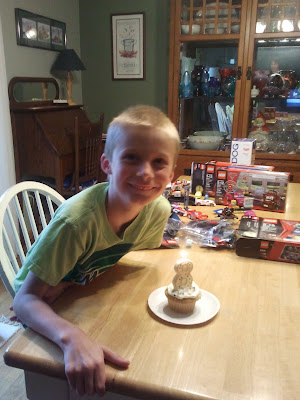 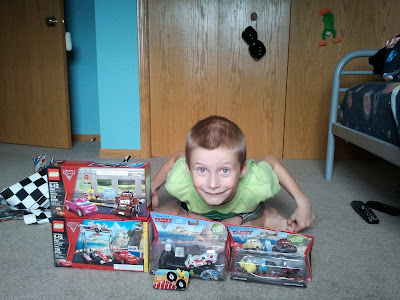 For his birthday he wanted to get a Captain America Cherry Coolatta and to play miniature golf.  So on Sunday we headed up to the closest Dunkin' Donuts, in Wisconsin Dells.  It was a hot, hot day and we only hoped we wouldn't melt in the sun playing golf.  The Dells were packed, lots of people at the numerous water parks and heavy traffic on the roads.  We headed towards the mini golf businesses and remembered that Timber Falls was in the trees along the river.  Perfect, there was a breeze and most of the course was in the shade.  It was still hot, heat index in the 100s, but we survived 18 holes. 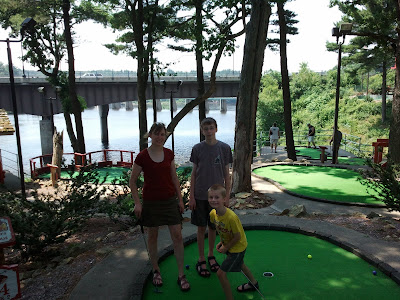 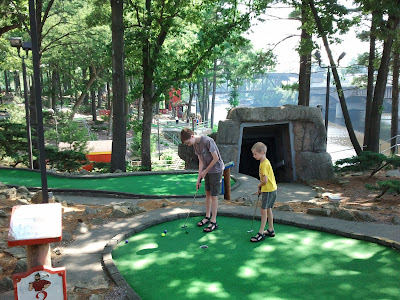 We headed to the nearest Dunkin' Donuts, this one was inside a gas station.  They had poor advertising and we needed to ask if they had the Cherry Coolatta.  Zack enjoyed it, I tried it.  It was sweet, tart, very flavorful and very red.

On the way home we stopped at Devil's Lake State Park to pick up a special geocaching packet for the park's centennial celebration.  It was too hot to try any finds that day.  We also stopped by a War Memorial along the highway by Sauk City.  Chad wants a tank now. 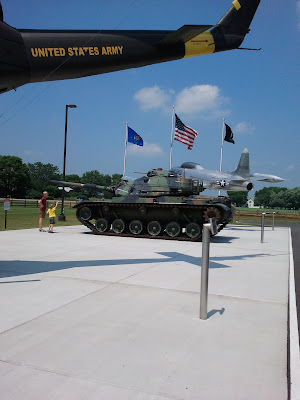 Heading out all loaded down with kayaks and bikes, Chad suggested one more stop before leaving Door County.  The winds were strong again, and more sustained so he suggested Cave Point again.  This time the waves certainly did not disappoint.  The sun was shining, the waves huge, and crowds big.  Others there must watch the wave conditions as well; and there were several photographers with professional equipment.  The waves were too big to climb below and walk on the rocks.  The spray went well over our heads standing on the upper cliffs.  We finally were able to show the kids the extreme water show after many years of trying. 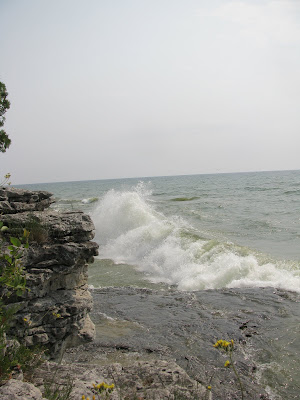 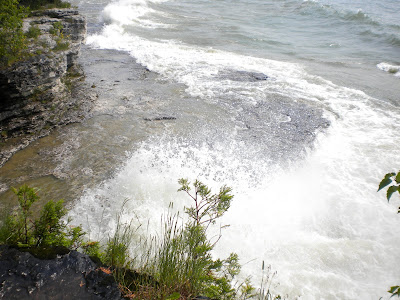 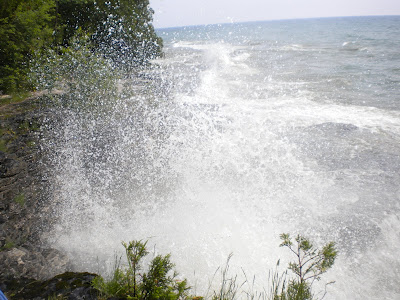 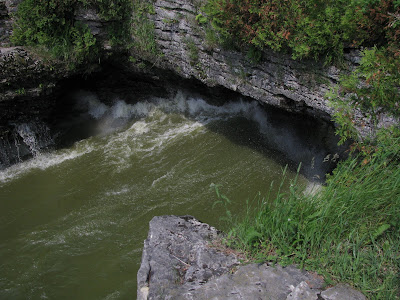 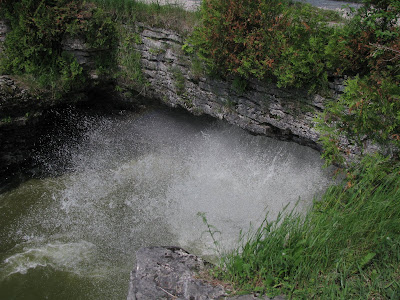 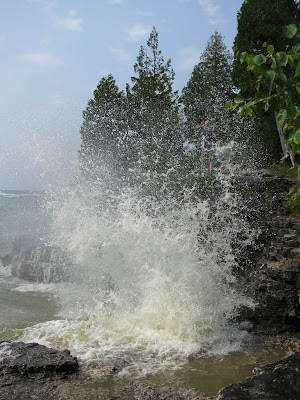 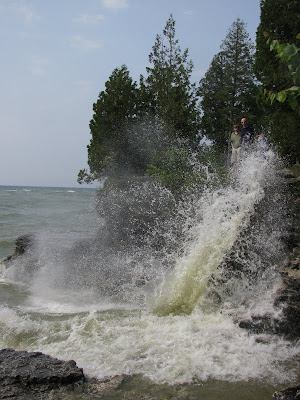 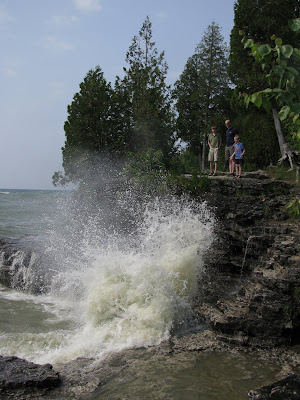 We try to eat at the condo quite a bit so we aren't always eating out.  But some places we just can't miss.  We enjoyed our must go to restaurants early in our vacation.  We ate at Bayside Tavern, breakfast at White Gull and soup at Summer Kitchen.

We also had pizza this year at Wild Tomato.  We didn't go last year, but it was still just as good as we remembered.  They have an extensive beer list and wood fired pizzas in addition to other items like salad, sandwiches and pasta.  We had a really good appetizer of different types of breads served with spreads and dips.  Kevin had a sandwich and the rest of us had pizza.  We sat outside and did not notice any mosquitoes while we were there.

For a new place to try, we checked out Fred and Fuzzy's Waterfront Bar and Grill for lunch.  There had been some recent reviews that looked promising and the location is off the beaten trail which is right up our alley.  It's down a long drive and surrounded by a cottage resort area that looked nice as well.  I did not notice any indoor seating, there were tables with umbrellas and tables without.  We chose one with, as the sun was hot that day.  The tables are just plopped on the lawn by the lake.  There is a dock, so you can pull your boat up and come on shore to eat.  A couple of kayakers pulled up while we were eating.  The food, I would describe as upscale bar.  Lots of appetizers and sandwiches.  I had one of their famous Door County Cherry Juice Margaritas.  It was served on the rocks in a big glass, and was quite tasty.  Zack had the kids Macaroni and Cheese bites, Chad and I both had Brisket Sliders and Kevin had an Italian Beef Sandwich.  All were good, and we had leftovers to enjoy later in the week. 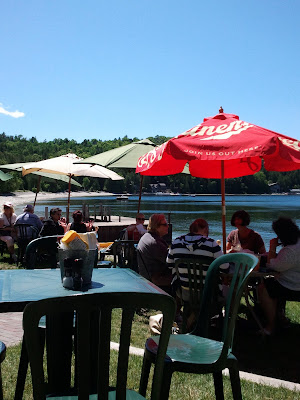 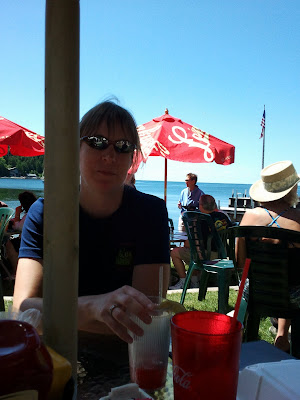 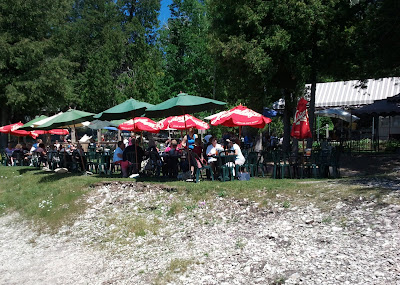 The weatherman on TV in the morning said none of the rain on the radar was reaching the ground.  OK, sure, we'll go with that.  It was the last day in Door County and we needed to go the big island via the ferry.  I mean, we already downloaded some caches and had a planned bike trip.  We headed up the Door for the ferry landing then unloaded the bikes.  The radar looked like the area of possible precipitation would pass while we were on the ferry.  It did start raining shortly after the ferry set off for Washington Island, and it was not raining much when we offloaded.  We headed north to our destination of Little Lake, the only inland lake on Washington Island.  The lake edge is located 250 feet from Lake Michigan, separated by a cobblestone ridge left by the glaciers long ago.

Up in the same area is People's Park, a small park giving views of lake on the west side of Lake Michigan.  It was here we stopped for a geocache and see the storms rolling in.  It was also here that we first heard thunder.  The storm looked south of us a bit, so we continued on. 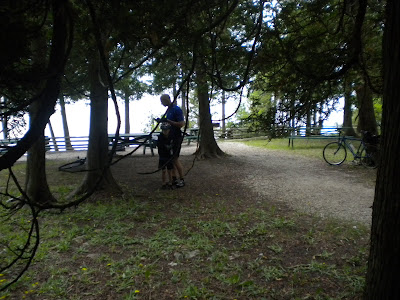 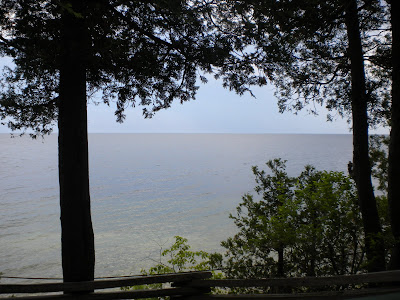 Jacobsen Museum was nearby.  It is a cool old log building housing historical artifacts from the area.  We concentrated our search outside, where there were lots of maritime artifacts and the walkway to Little Lake. 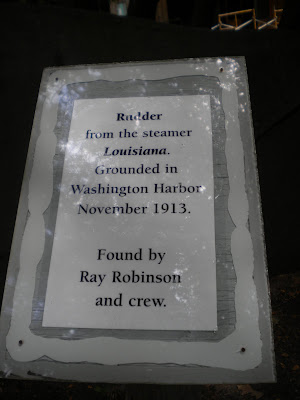 Hearing more and louder thunder, we hightailed it out of there and biked as quick as we could back to the ferry dock.  The sky was getting pretty dark, and about halfway back the raindrops started falling.  Much of the road back was tree lined so nobody got too wet since the rain was light as well.  At the ferry dock we stopped at Island Pizza for bags of fries and slices of pizza.  Soon after getting our table under the canopy the sky let loose and it began pouring.  Lightning strikes could be seen out over the lake.  We hung out eating lunch until the next ferry was close to boarding.  The rain had subsided just before then and we boarded without getting wet.  I guess timing is everything. 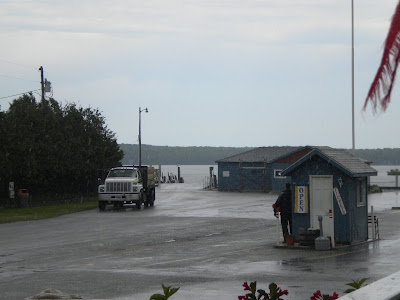 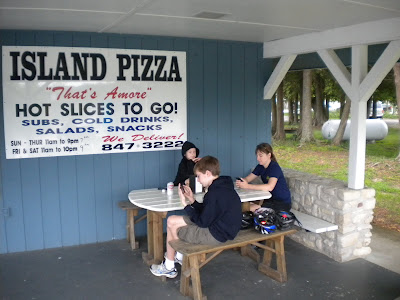 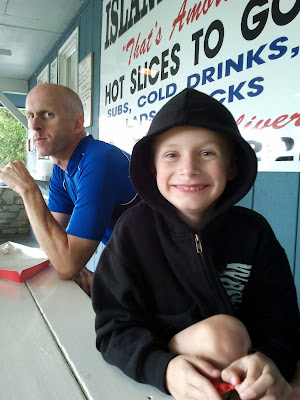 Another wonderful day in Door County gave us the opportunity to kayak to Cana Island.  We left from Moonlight Bay, which is accessible from Reiboldt's Creek.  There is a small gravel pull off for parking just before the culvert at the creek.  There is a small grass launch area into the shallow creek.  Stick to the small, deep channel to avoid bottoming out.  Further out in the bay is a town launch as an option for the boats, but there is a launch fee per boat.

It is a very quiet paddle, we saw no one else at the launch or in the water on the kayak, other than a couple small fishing boats.  There is another bay area to cross, so the closest line does take the kayaks further away from shore.  It was a long paddle and Kevin did need a tow before getting to the island.  You can also access the island, and tours of the lighthouse, by crossing a causeway.  The causeway has been above water for years.  Chad and I went many years ago when it was up to knee deep in cold water before we gave up and turned around.  The island is a very photographed lighthouse in Door County, although I found the trees are growing quite high around the light house compared to others I have seen in the county. 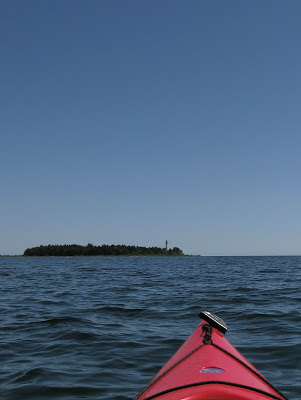 Kayaking was a wonderful way to approach the island, and we took a break on the shore before heading back.  Care must be taken when pulling on shore as there is a large shallow rock shelf that extends quite a ways out, which I suppose was the reason for the lighthouse placement. 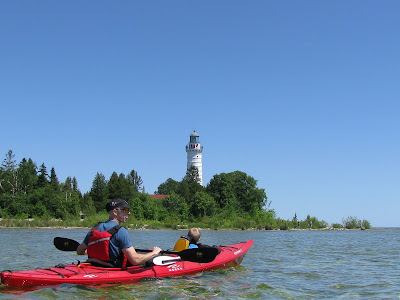 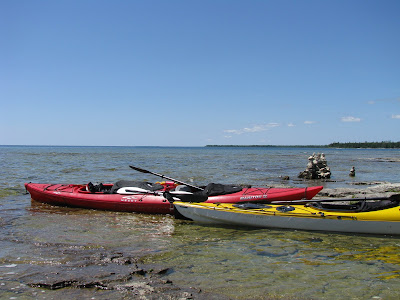 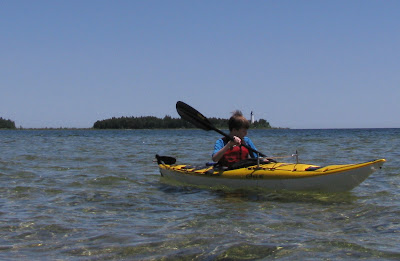 We spent a whole day making our way up the Door Peninsula geocaching.  Our new photographer, Kevin, recorded the events of the day. 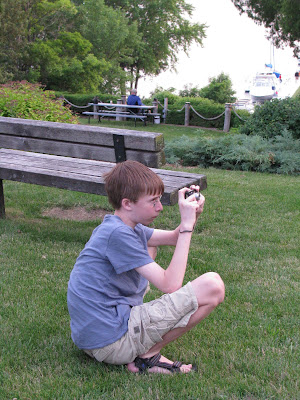 The caches took us to many tiny parks with awesome views, and we were successful with all our cache finds.