For Father's Day we took Chad for a bike ride.  The same bike ride proposed last week.  A ride around Lake Monona.  Maybe the boys felt more obligated to do it since it was Father's Day, but I figured that they would enjoy it.

The weather was nice, mostly cloudy, not too hot or humid.  The route we took was Capital City Trail from Monona Terrace to Waunona Way, Winnequah Road, then follow the bike route signs to Our ride was 14 miles total, and we took a stop halfway through at a soda fountain off the beaten trail, Monona Bait and Ice Cream Shop.  They have Babcock Ice Cream, and the typical fountain treats like sundaes, ice cream sodas, flavored Cokes, and phosphates.  There was a nice enclosed porch to sit on in the front of the building, or tables outside under a big tree.  We chose outside at a picnic table to enjoy our treats.  Chad got a free sundae for Father's Day, and everyone enjoyed their mid-ride treats.  Across the street from the ice cream shop is a park with a beach on Lake Monona that was a quick stop before we restarted the ride. 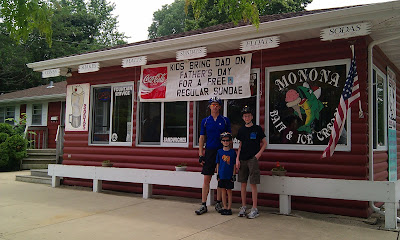 On the ride the boys saw the back of Olbrich Gardens, and they want to make a trip there sometime.  And they may even be talked into riding our bicycles to get there.  After the ride and loading the bikes, slices at Ian's Pizza on State Street finished up our day out on the town.
Posted by Jenny at 9:44 PM

Day out in Middleton

After fire training and yard work, we headed in to a late lunch at Hubbard Diner in Middleton. We are on this kick of trying new restaurants and it's been working out pretty well.  On Saturdays and Sundays Hubbard Diner has brunch until 3:00 pm.  This means a couple of special items, and anything off the breakfast menu.  Chad had a special egg scrambler, I had a black bean burger with salsa, sour cream and Monteray Jack cheese.  Kevin had Mac n'Cheese and said it was better than the dish he likes at Bluephies in Madison.  He said the sauce was creamier.  Unfortunately we didn't have any room for their famous pies.  We will have to go back another time.

Zack dressed in his swimsuit when we left home since the plan was to go to the Middleton Splash Park.  We were there last Saturday, but the fountains were already off for the day.  After lunch we headed over there.  Zack had a bunch of time playing in fountains. 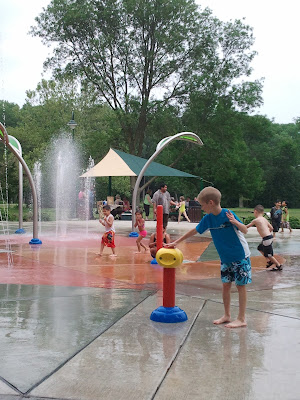 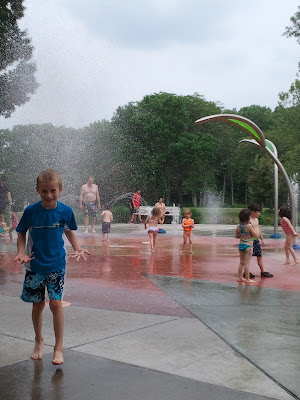 The kids were hungry for dessert after Zack was done in the Splash Park.  Seeing the menu at Hubbard Diner, they had favorites they wanted to try.  We headed back there for shakes.  Kevin ordered a Dreamsicle Shake and Zack had some minty, cookie, chip kind of flavor.  The kids liked the shakes but the straw was too narrow for Zack to suck up the cookie pieces effectively.  Chad and I were still full from lunch so we went over to a cupcake shop around the corner, Bloom Bake Shop.  The shelves were pretty well cleared out, but there were still some awesome flavors left.  We picked up four cupcakes.  Two Maple Bacon(yes, bacon), a Lime Coconut, and a Salted Chocolate Caramel.  The staff was very friendly, and were working hard on baking more cupcakes to fill the shelves.  They apologized for the limited selection, but we left very happy with our choices.  The cupcakes were good, and Chad said they were the best cupcakes he has had from a bakery.

Today we made the kids go outside.  It didn't matter what the activity was, but it was going to happen outdoors.  The big kid decided that he did not want to go for a bike ride around Lake Monona and lunch in Madison.  Sounded kind of nice to me, but....

Next idea, and one I figured they couldn't pass up, was to drive to Devils Lake State Park, have a picnic lunch, then hike up the bluffs and maybe catch some geocaches.  Zack had no opinion, and Kevin said "I suppose" so we had a WINNER.

Since everyone has different preferences for sandwiches, lunch was the closest Milio's Sandwiches.  The store in Baraboo was a combination gas station, Milio's, and grocery store.  A FULL grocery store, not an expanded convenience store.  Chad said he wished there were lots of these, as it would be the ultimate stop during a long bike ride.  There was everything you needed, all in one place.  We picked up subs, chips, drinks, and cookies.  Kevin also wanted potato wedges out of the hot case at the grocery store, and he ate those in the car on the short drive to the state park.


After the picnic lunch, we packed the backpack and headed to the trails.  Kevin wanted to carry the backpack, with all the drinks, camera, sunscreen, etc, etc, etc.  Chad and I had no trouble letting him, and quickly adjusted the straps for him.  He was like our pack mule, constantly being stopped along the hike so someone could dig the needed item out of the pack on his back.

We hiked the West Bluff Trail (1.4 miles) and the Tumbled Rocks Trail (1.0 miles).  There were a lot of stairs on the climb up the bluff, but the views from the top were amazing as always.  We found a couple geocaches, both pretty easy spots.  Picked up a travel bug that we will move along. 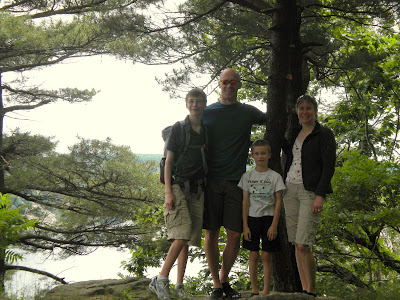 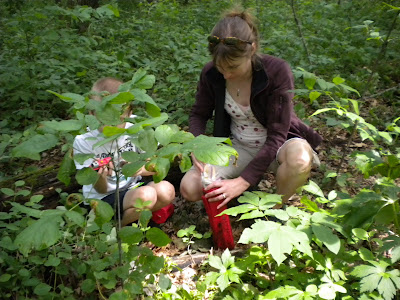 Zack was cruising in his Vibram Five Fingers. On the way down the bluff he started running out ahead of me.  I jogged to keep him in sight.  This started a whole family run down the hill.  Zack said his legs just felt like running.  I worried that one of the kids would trip on the rocks or roots in the trail and land on their heads, but luckily everyone survived without injury.  At one steep point, Zack yelled repeatedly, "I can't stop, my legs won't stop."  There was nothing I could do, but it was just so funny that Kevin and I couldn't stop laughing as we all sprinted down the hill after him.  I was surprised he did so well in the Five Fingers, but he did take a break once telling me his hips hurt.  What?  How does he even know hips?  About 30 seconds and he was recovered. 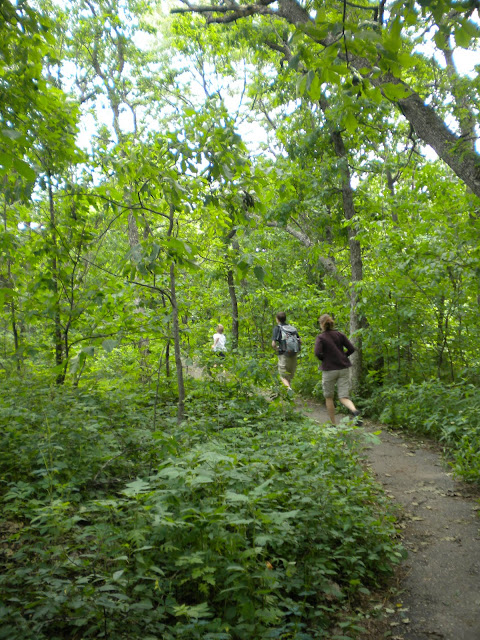 Back to the beach at the north shore, then some treats at the camp store and we were headed home.  The park is celebrating 100 years of existence as a state park this year.  There are some special events, and we may head back up soon to try and complete some of them.  One is a 10 mile hike log, that will earn each of us a special wooden nickle.  The other is a geocache event that takes cachers to many historic sites throughout the park with a brochure of historic pictures to reflect with.  Better get up there soon though, before the mosquitoes get too bad.
Posted by Jenny at 9:24 PM

Hanging out in Madtown

Kevin ditched us for a sleepover birthday party tonight, so the three of us headed into the big "Madtown" to run some errands and have some dinner.  Chad suggested we try someplace new, and there are a lot of restaurants on the Capital Square that we never have been to.  We ate at The Old Fashioned, a restaurant with food based on the food served at Wisconsin supper clubs and taverns.  The restaurant was decorated with old beer signs and banners with pictures of cheese.  Just walking in the door was all Wisconsin, with a refrigerated case at the hostess stand with various cheeses to buy.

We were seated on the second floor, just a couple small tables from large windows overlooking the state capital.  The meal was good, and we all had ideas of more menu items to try the next time we come.

After dinner, the temperature didn't seem too bad, so we walked around the capital building.  Zack was testing his five finger shoes in addition to challenging Chad to races.  Some of the races were sprints and others were jumping challenges.

We spotted a pretty view of Lake Mendota on the last side of the capital, which gave me the idea of heading over to the UW Memorial Union to have some Babcock Hall ice cream lakeside.  It was a little cool to eat outside, but we found a table inside to finish our cold dessert at before heading out to walk along the lake.

The boys and I went to the Middle School production of Alice in Wonderland that some of Kevin's friends were in.  The play was funny and the kids did a great job, especially with only two weeks of practice in the final weeks of school.  I was reminded of this play as Zack sat on the chair on the Memorial Terrace.  "Drink Me"

End of the School Year

Already it's time for the end of the school year for the kids. 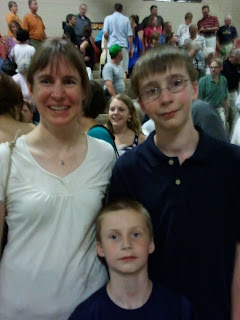 Last night was 8th grade graduation for Kevin.  It was sure a night to remember.  We headed over early to avoid getting rained on by the thunderstorm that was coming.  The last couple days were super hot and humid, and the school gym was hot, sweaty box with well over a thousand people in it.  The first set of speakers was just finished when the lights went out, flashed, and then the emergency generator kicked on with the emergency lighting.  With no electricity for microphones, the school staff struggled to keep everyone's attention and continue the program.  The 8th grade choir sang their song, and luckily had a piano for accompaniment.  It was probably during this, that I heard the tornado siren.  After the song, I saw a megaphone appear on stage and unpacked from the box, then quickly disappear.  I'm guessing it didn't have batteries in it.  The principal announced that the police said the tornado was not in the immediate area so we didn't have to take shelter.  Comforting?  Maybe not.

They did continue with speeches and then began handing out graduation certificates.  You could barely hear the names, but just watched for your graduate to come up on stage.  About two-thirds of the way through the 200ish graduates, the power came back on.  The storm settled down and they opened the exit doors to the gym, providing at least a breeze through the area.  The ceremony ended with a class video, then the graduates headed off for their dance with the time that was left.  The ceremony ended up going 45 minutes longer than planned.

Today, was the last day of school.  Zack finished up 2nd grade, the top grade at his school.  Later this month that school will go over major renovations and new construction.  To release the kids today, the teachers formed an arch for the kids to run through.  Next year is 3rd grade and new school for Zack, and high school for Kevin. 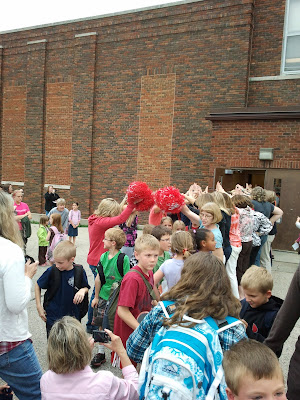 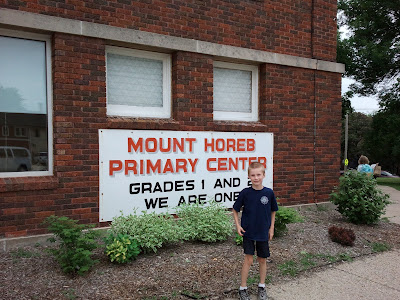 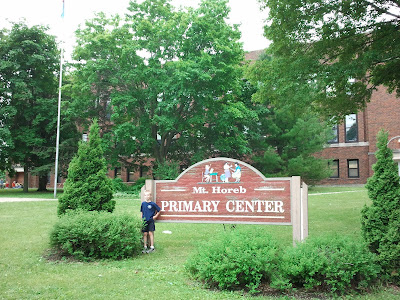 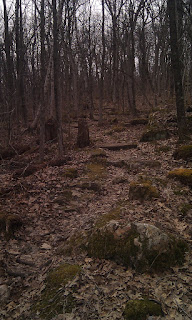 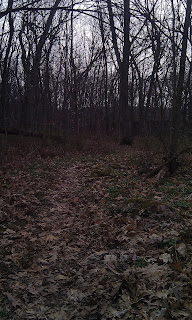 Took these photos a few weeks back, tomorrow we run these trails. No really that is the course, and I doubt I'll be charging up the stair like trail above after 10 miles.

Need some inspiration or just another reason to call runners crazy check out this upcoming film, http://www.ws100film.com/ .