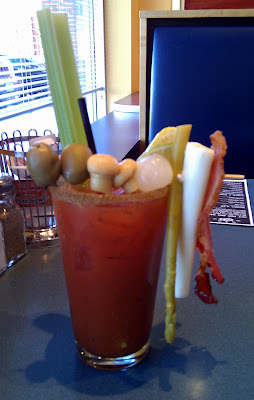 OK, that's not a pumpkin, but it was good.  Cleaning out the camera and thinking back to what we have done the last couple of weeks I found this gem.  We went out to brunch at Bluephie's a couple weeks ago and I had a Bloody Mary to go along with.  This was an ultimate Wisconsin style Bloody Mary complete with bacon and cheese as garnish.  With all the veggies it was a meal in itself.  The rest of the meal was pretty good too.

We went to pick pumpkins "out of the patch" at our CSA farm, Middlebury Hills.  There were lots to choose from and they had a pumpkin wash tank set up so we didn't have to take the field dirt home with us.  There was a carving station set up, but we told the kids they better wait if they wanted their pumpkins presentable for Halloween. 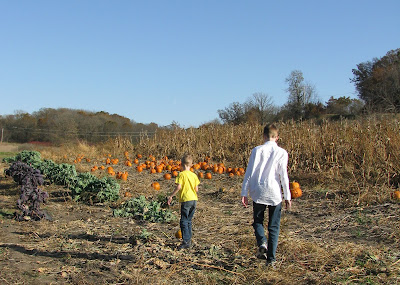 My birthday also came and went in the last couple weeks.  There was lots of eating out, cakes and shopping.  Here are a couple highlights: 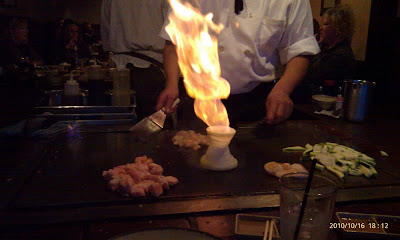 We went to Ginza, a hibatchi restaurant.  The show is great, and so is the food.  The flaming onion is always one of the most spectacular.

Here is the cake I picked out, a pistachio chocolate cake from Whole Foods.  Their desserts are always spectacular in decoration.  The cake was super moist with multiple fillings, but it was quite sweet too with a thick white coating over the entire surface that was airbrushed with green and brown coloring.
Posted by Jenny at 9:14 PM

I went out to the nearby county park to goof around with the camera. I had passed by the park on my bike earlier and with a wind storm on the way figured the trees would be bare by the weekend.

Here are a few of the shots I took. 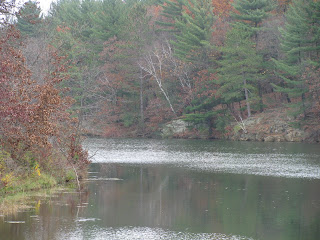 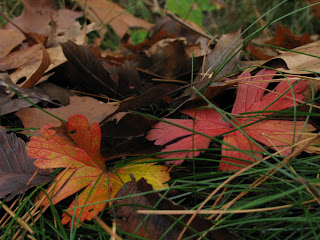 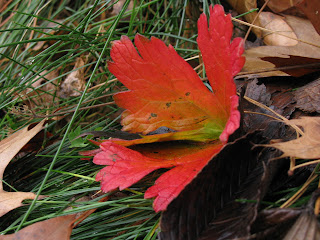 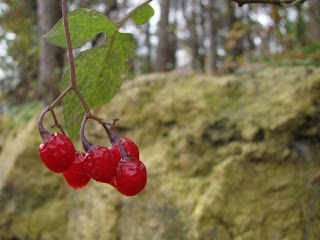 We headed out last Saturday to check out the fall color.  It was quite warm, up into the 80's which is completely NOT fall weather in Wisconsin.  Some trees around us were changed so we traveled west in search of more.  This was an impromptu trip, and Chad thought of the idea of going to Mill Bluff State Park.  Zack wanted to go geocaching and with Chad's new smart phone we didn't even need to look up any coordinates before we left the house.  I must admit I am addicted to his phone, it kept me very occupied on the trip.  If a question came up about lunch, directions, information...I used the phone to look it up.  It's magical!

We grabbed a late breakfast on the way out of town at Barriques.  It was good, and I ordered a miel(espresso with milk, honey and spices) and it came with a design on top.  Cool!  We also picked up a cheese plate for lunch later.  This turned out to be a huge disappointment.  It was a bunch of bread rounds, half toasted with garlic, some cherry chutney, and ONLY 3 SMALL PIECES OF CHEESE.  The size of the pieces was not much bigger than I would cut at home to put out on a plate.  This IS Wisconsin, and I think I deserve more cheese...especially enough to go with the amount of bread.  Otherwise, don't give me so much bread!  It was dry bread too; Zack the bread lover wouldn't even eat it.

The color improved during the entire trip, and the state park had great color.  Unfortunately, the park was closed for the season.  You would think they would stay open until the end of October to allow visitors to have services while enjoying the views from the bluffs.  The pump water still worked. 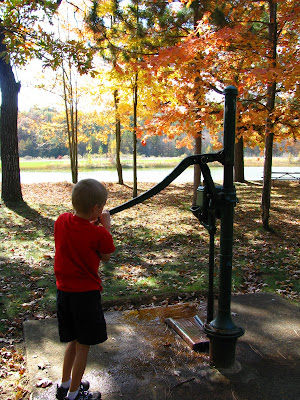 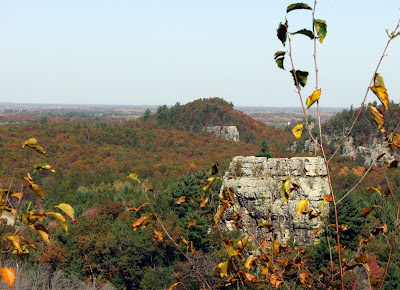 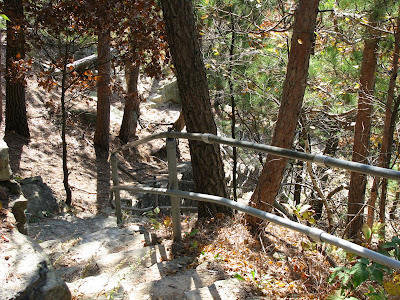 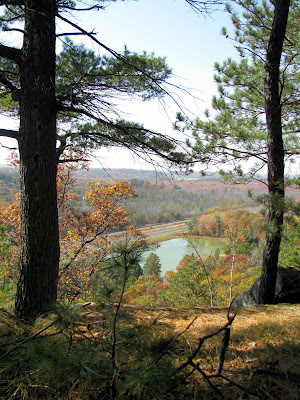 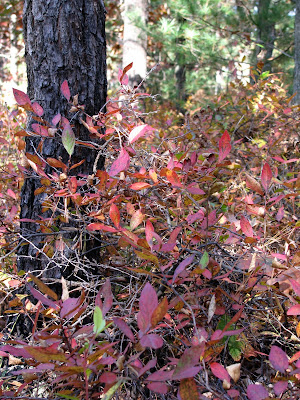 We also thought the cache was up here since it was called Mill Bluff cache, but after checking out on top and then on a trail below the bluff we knew we would have to find another bluff on the other side of the interstate.

There is a train track that goes right across the road from the park.  The kids heard a train coming and watched for it.  Thinking I would get a cute picture of Zack watching the train go by, I waited as it got closer...then closer....then closer....then the train and it's horn got too loud for him and he sprinted in the other direction... 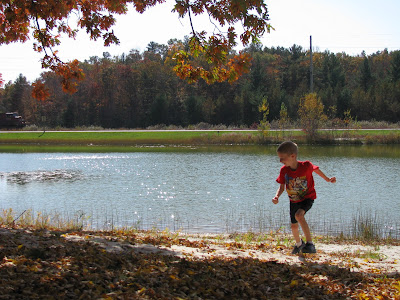 After eating our small lunch, we headed over to another area of the park and hunted the cache. 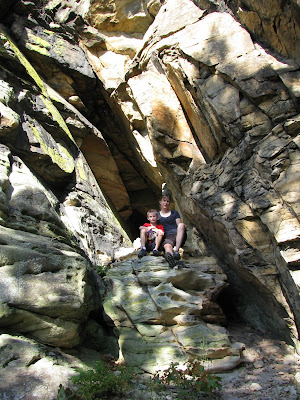 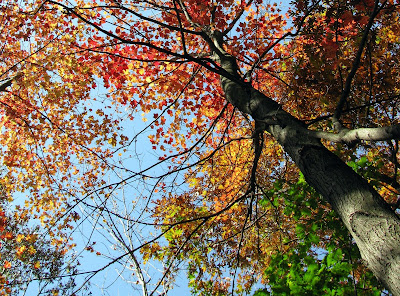 On the way home we stopped at a rather unusual ice cream shop in Mauston.  It advertised 24 flavors of soft serve and they had that and so much more.  Most of the menus were written with marker on construction paper.  I had a coconut soft serve cone. 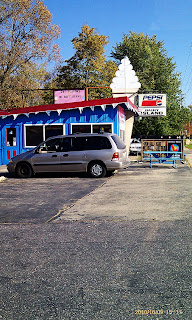 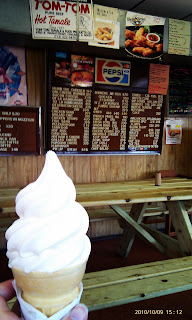 Since it was such a warm day I thought we should eat out on a patio for supper.  We headed down to State Street to The Tiki Shack.  Chad and I spotted this place earlier in the summer when we saw patrons outside eating buckets full of crab legs.  State Street was hopping with people eating outside, post-game Badger fans hanging out, and high school kids dressed for Homecoming Dances on their way to their dinner destinations.  Chad waited patiently(?) while I took a picture with his phone.

After dinner we cruised around the Capitol to further enjoy more of the day.
Posted by Jenny at 10:21 PM