Snowshoeing Across the Lake

All right, it may have been late in the season for snowshoeing.  Chad laughed when I offered the idea to Zack.  But there is still snow on the ground, in some places.  Zack really enjoyed playing in the yard with his snowshoes a few weeks ago, the sun was finally out, and we all had the day off work or school.  Zack jumped at the chance to go.

There are several parks in the area and all are wooded so I figured we would find OK conditions.  The closest park looked pretty good, there was plenty of snow on the trail although it was pretty well packed down.  The park also contained a small lake that we could cross to shortcut the trail.  After getting on the snowshoes, we headed to the trails. 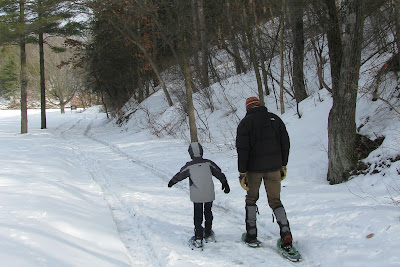 There were a lot of animal footprints to check out, Zack thought he saw bear tracks but I'm pretty sure they were from a large dog.  We headed to the beach to sun ourselves before crossing the lake. 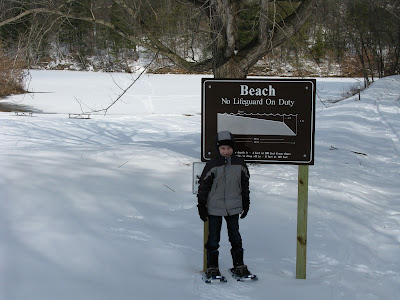 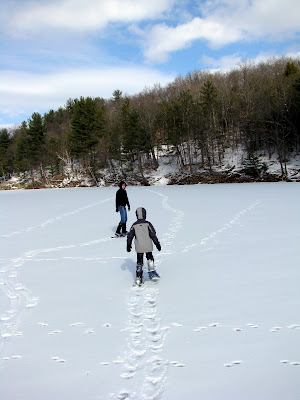 I think Zack was a little nervous crossing the lake at first, but if I went first that seemed to be better.  We encountered more tracks going across the lake, and one was quite unusual since it seemed like a foot was dragging with each sequence.  Zack, who is a footprint expert since he just covered the subject a couple weeks ago in Challenge Group, said this was the track of a fox, because the extra mark indicates such.  Chad and I stared at each other and agreed because neither of us knew any different.  Zack seemed confident so that was enough for us.  Here is the fox track. 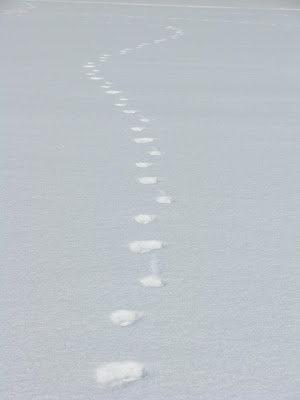 The other side of the lake was a haphazard trail and at times difficult but we all made it through. 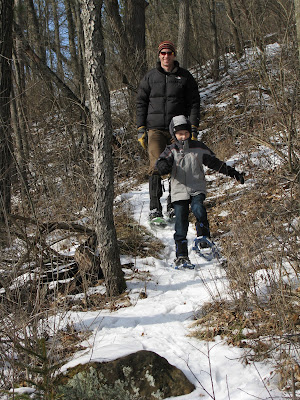 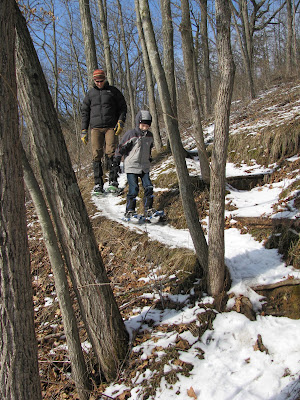 It come out onto the main trail again near a rock grouping that we climbed because Zack said it was a great spot for a geocache.  He took one look around the rocks, from a distance, and declared there were no caches here. 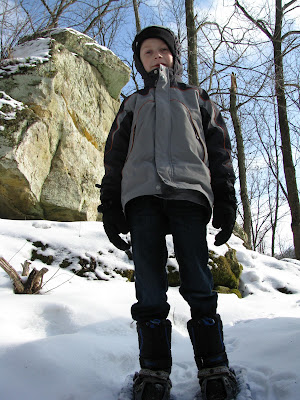 On we moved to back to the beach area, but this time we were in the shadows and it became a little chilly.  I suggested a hot drink and cookies at the local chocolate shop, but the boys had other things in mind.  They had to go back to the beach to try and break ice.  They laughed and called me a girl when I objected, so I let them have a little fun before we headed to our snack. 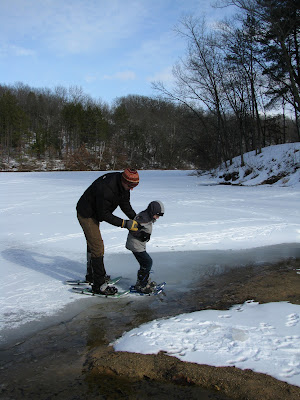 Snowshoeing in the Yard

Last week we got a huge snowfall.  School was closed the next day, people were stranded on the roads, and the village workers are still removing snow from the roads.  Chad was even called off from work, and his trucks go out in more bad weather than the postal workers.

At 11:30 p.m. during the storm I ventured outside to clear the furnace vent pipes, as the huge drift out the kitchen window finally covered them over.  Going out through the deck, the snow was up to my hips and my tracks covered in the blowing snow by the time I turned around to go back inside.  The wind continued and the next afternoon the pipes were covered again.  I certainly needed to clean the drift out again.  The fire department had a call that day to a duplex with the carbon monoxide alarm sounding and we had to trudge to the back of the house to clear their pipes.  Chad suggested I wear his snowshoes to clear the drifts and get back to the corner of the house without sinking into the snow.  Zack came out with me, using his snowshoes and he had so much fun we stayed outside until the sun was setting. 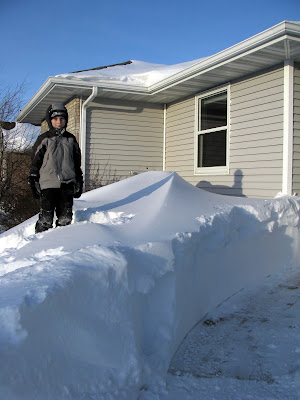 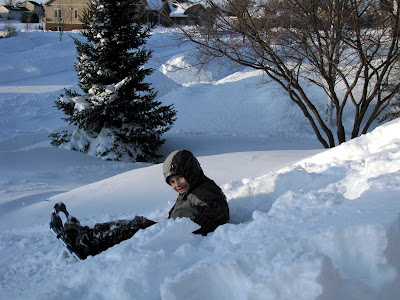 I don't usually write too much about work on this blog, keeping the content to family and our activities.  But this date holds significant meaning as one year ago today our fire department lost our Chief Chuck Himsel to a sudden cardiac death.

It was a tough time for our fire department and I organized a large scale fire department funeral within a week.  Going on at the same time as funeral preparations was the production of a tribute video.  The video production was done by another local Fire Chief, Aaron Harris of Middleton.  The video played on continuous loop during the visitation and funeral luncheon at the fire station.  There were many nationally known fire service members involved in the video in addition to local fire members including me.  Chief Harris' goal was to have widespread coverage of the video to spread the word of rich fire department history and the heart of a true firefighter.

The video had final touches completed after the funeral, and just recently was posted on YouTube for all to see.  Please watch: