Chad's goal this year was to complete another marathon, after the course in 2010 was closed down early.  His training started in the cold winter months.  Unfortunately this year the Madison Marathon course was closed again, this time on Friday before the race.  Anticipated weather forecasts were into the 90's for the day.

Marathon runners were asked to run the half marathon.  Chad was not exactly happy about it.  Before the expo, he suggested that we could run the 10k that is run at twilight on Saturday night before the half marathon since he was not running the full marathon.  Since I had a 6.5 mile training run scheduled, I figured the 10k would fit well enough.  I like races that look like they would be fun and the Twilight 10k was run starting at 8 pm from Capital Square and runners wore issued twinkling lights.  I guess shiny, flashing lights are all I need.  We both signed up, and Chad was able to save $20 on his entry after asking for a discount due to his marathon run being cancelled.

We did my scheduled run/walk training plan for the race, and it worked well.  I was happy with how well I felt at the end of the race, and I didn't die on the hills.  Running towards the Capital at night was also very motivating for those last hills.  I finished in 1:04.  I even received a medal.  They had post race snacks perfect for night time including chocolate milk, Rocky Rococo pizza, and a beer. 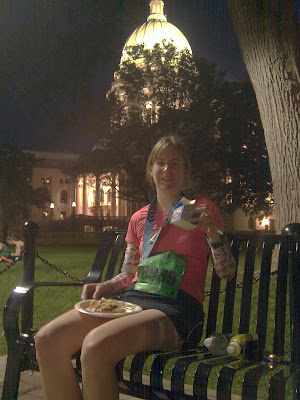 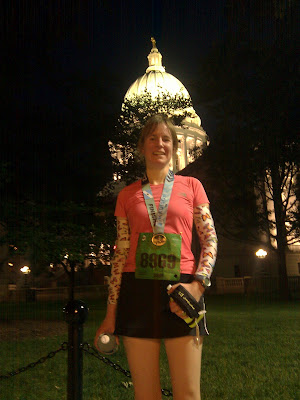 Chad's half marathon started at 7:15 Sunday morning.  It was pretty cool out yet, but weather was still looking to be hot by late morning.  He had an app on his phone called Glympse, that let me track his up to date location.  I saw him out on the course a couple of times, and the rest of my time was spent waiting in line for a coffee and bagel.  I felt lazy; Chad ran 3 miles in the time it took me to wait in line for a mocha.  It wasn't too hot by the time he finished, but the heat was rising.  I think he was happy with his race, given the conditions. 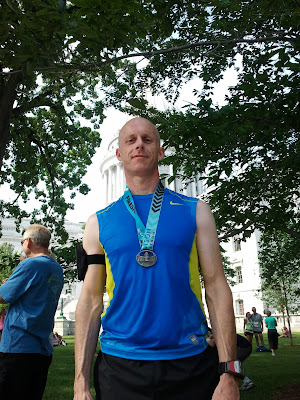 Training runs for me continue through the summer until my half marathon in August.  Chad will be running with me.  I guess I'll let him carry all my water and fuel.(just kidding)  Here's hoping for good weather for the Madison Mini-Marathon.
Posted by Jenny at 10:46 PM

Chad and I both ran on Saturday, Chad doing the Monona 20k and me running the 5k.  Luckily it did not rain, although it was cool, windy, and overcast.

The Monona 20k a nice sized run, which I gauge by how far away we need to park.  We were right on the edge of the park in a lot, and there were plenty of spots left when we got there.  We hung out around the shelter for a little bit, used the bathroom, then walked back to the car to deposit our jackets and grab the rest of our gear.

The 20k headed out first, with the 5k starting 15 minutes later.  The 20k course, from what I hear, if flat and scenic as it travels around Lake Monona, most of the time with a view of the lake.  The 5k course is around the neighborhood of the park, has some hills, and you don't see the lake.  The course is not closed, but there is very little traffic on the streets.  The 20k course uses some paved bike trails.

Last year was the first 5k, and the number of participants was really small.  So small in fact, that I placed in my age division.  Haha! There were more runners this year, ranging from marathoners on their off weeks to novice runners.  The 5k is also a walk, but I don't know how many walkers there were.  I had plenty of time after my race to grab some food and water, go to the car to get more clothes, and have a free massage.  Chad finished right around his prediction of 1:45. 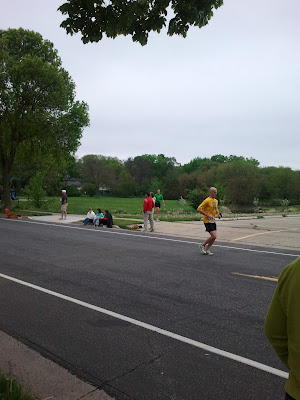 The after run spread was really good: Capital Brewery beer, Quaker Steak wings, chips and queso from Qdoba, along with an assortment of snacks including pretzels, animal crackers, fruit, trail mix and much more.  By the time we made it over to the park shelter there was quite a long line, but the beer and chips and queso had separate lines which was nice.

Onward in training, Chad is finishing up his runs to get ready for the Madison Marathon and I am just revving up for a half marathon in August.