Cupcakes on State Street and sweating them off

This weekend Kevin was participating in a regional competition for National History Day.  Judging was Saturday on UW-Madison campus, with awards in the afternoon.  The rest of us headed downtown to watch the awards and grab a bite to eat.

Always looking to try something new, we decided on AJ Bombers.  I looked up the menu on my phone, to make sure there were choices for Zack.  A sit down restaurant, we filled out our order on the paper menus and turned them in.  Chad and I ordered the Milwaukee Burger with cheese, bacon, and beer soaked onions.  Zack ordered some hot pretzels and was going to share the burger with Chad.  They had peanuts in the shell to eat at the table.  Delivery of the peanuts came from the bar via some overhead vessels on tracks.  The bartender pushes them across the restaurant where they hit a target springing open a door on the bottom that dumps the peanuts down a chute into a bowl.  Zack loved watching it happen throughout our meal. 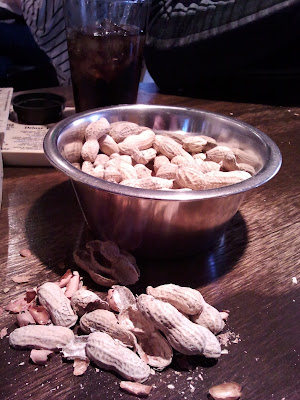 He also couldn't remember having peanuts in the shell before, but he enjoyed learning how to open them.  I freaked out about throwing the shells on the floor, since I didn't see any other shells by other tables.  At the end of the meal, while I was picking my shells off the table to put in my empty meal basket, the waitress "yelled" at me and said they were meant to be thrown on the floor.  She said they sweep them up every night.  I told her I just couldn't bring myself to throw them on the floor and make a mess.  Chad and Zack laughed at me for being a neat freak, so I dropped two shells on the floor.  Not to be outdone, Zack swept a whole pile onto the floor and I cringed.   The food there was very good, and Zack wants to go back soon.

After lunch, I wanted to try out a State Street bakery where I saw cupcakes in the window during the Shamrock Shuffle.  I didn't know the name, but knew it was right around where we started the race.  We spotted it as soon as we got into the area.  The name is Madison Sweets.  They had quite a selection in the case, so we decided to take a box of four with us.  They had some unusual flavors. 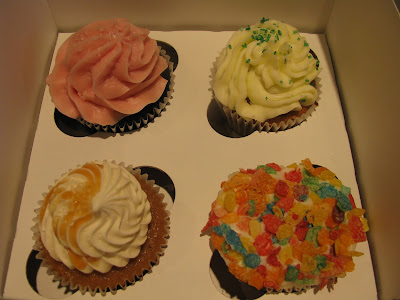 One we tried had avocado in the cake with lime frosting.  I picked a dark chocolate with pomegranate frosting, Chad picked a salted caramel cupcake that Kevin ended up eating, and Zack chose a Fruity Pebbles cupcake.  The three I tried were all quite good.  I liked the cake, it was very moist and not oily.  The avocado cake was a little strange when eaten separate, but the cupcake as a whole was great.  Looking at their website, I see many more flavors I want to try.  One special flavor of the day looked intriguing, but none of us wanted to try it:  I saw Doritos on top, and a bright yellow green frosting.  When we asked, it was a Mountain Dew and Doritos cupcake.  Wow, but no thanks.  Kevin likes Mountain Dew, but doesn't like the Nacho Cheese Doritos, otherwise I would have gotten it for him.  Sounded like a good teenager or college student flavor.

That was yesterday.  Today was our day to do things outside.  It was warmer and sunny out today, compared to yesterday.  And we were busy eating our way down State Street yesterday.  We started with bike riding practice.  We went to the school lots where Zack was working on riding a bigger bike, and Chad was going to practice his unicycling.  Chad rode down the grassy hill a couple times.  Kevin and I tried the unicycle too.  We had no significant forward motion, since it was hard enough to just get up on the bike and balance.  We had a nice tree to hang on to while we worked our core balancing on the bike. 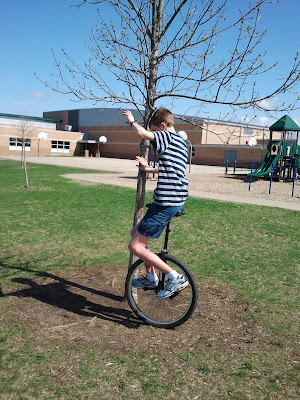 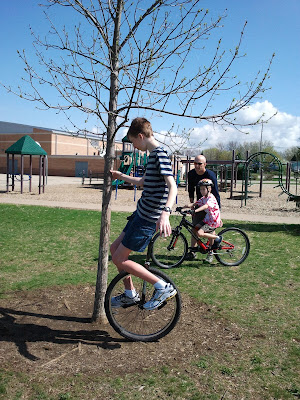 In the afternoon, Chad, Zack and I headed out to the state park for a trail run/walk.  We missed a turn on the way out of the parking lot so we went on some single track bike trails thinking it would be more fun to run.  It was pretty muddy, and we ended up walking most of that trail.  Zack took off a little more when we got back on the wider, gravel nature trail.  He had two speeds, walk and sprint.  While we were at the park we also climbed both observation towers.  Our hike totaled 2.2 miles and we all worked up a sweat.  Burning off those cupcakes from yesterday.

This year the whole family participated in the Madison Shamrock Shuffle.  It landed right on St. Patrick's Day this year.

Zack just wasn't ready to committ to a 5k, but he has wanted a green shirt since Chad ran the 10k last year.  So he signed up for the 2 mile walk, and I signed up along with him.  Kevin signed up for the 5k once it looked like the weather was going to be warm.  He even went on some training runs before the date of the Shuffle.

The weather on Saturday was wonderful.  It was short sleeve and shorts weather, so the long sleeved green shirt that came with the entry was unseasonable.  The online instructions for the run said runners should be cautious and on the look out for ice on the course.  Not this year.  The high for Saturday was to be 80 degrees.  No ice in sight. 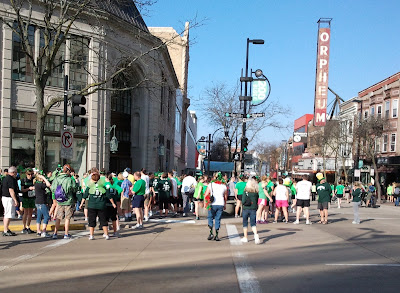 We parked close to the finish and headed up to the Overture Center to check out the crowd and look for bathrooms.  Finding huge lines, Chad suggested we go the last few blocks to the State Capitol to use the bathrooms.  It was a nice walk, and the Capitol was almost vacant, so no line at the bathroom. 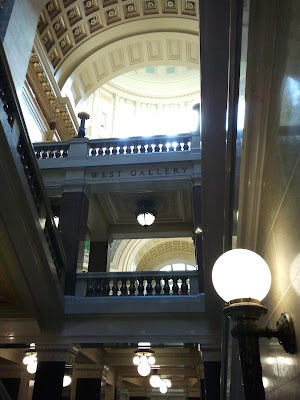 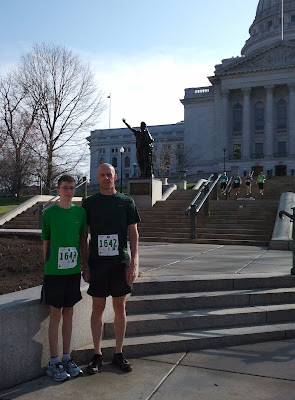 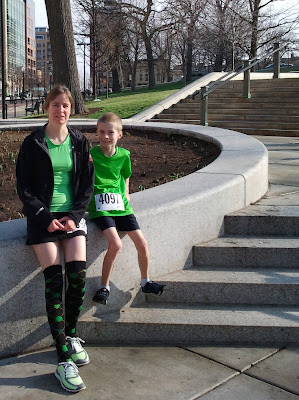 The Shuffle was filled this year, and the announcements said over 4,000 runners and walkers were heading out Saturday morning. 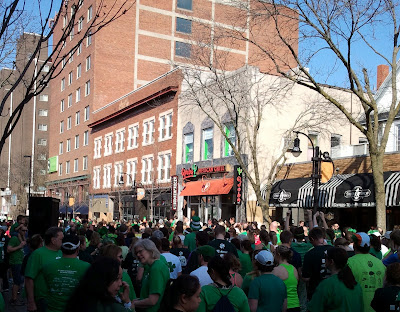 By the time we headed back down State Street, Chad and Kevin lined up in the street for the start of their run.  Zack and I headed out 5 minutes later. 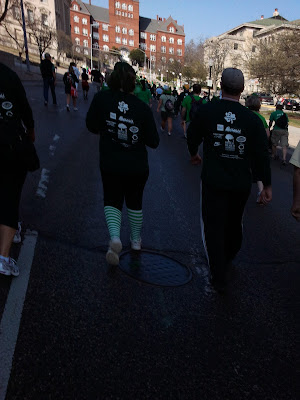 The course headed down State Street, and over past the Memorial Union.  Then up the Observatory Drive hill and past the Carillon Tower.  The 5k was an out and back that went to the Natatorium and back.  Zack and I turned at Babcock Drive and headed to the Lakeshore Path where we joined up with the 10k route.  Zack enjoyed walking along the Lake.  He did great, just needing a little encouragement in the last half mile. 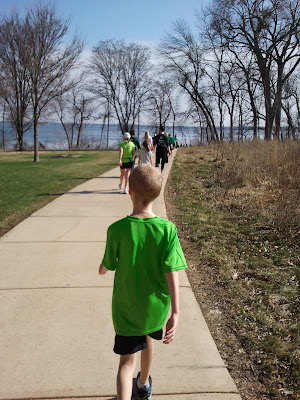 Chad and Kevin finished in 36:09, a good job for Kevin's first run.  And the best part, Kevin wants to run more.  He will probably run the Monona 5k with me in a couple months.
Posted by Jenny at 9:05 PM