We went to Devil's Lake State Park to hike to gain more mileage towards our 10 mile goal for the year.  The park has a special hiking club this year due to their centennial celebration.

The weather was cool, but it was still a beautiful day.  We started with a picnic lunch of cheese and sausage by the lake. 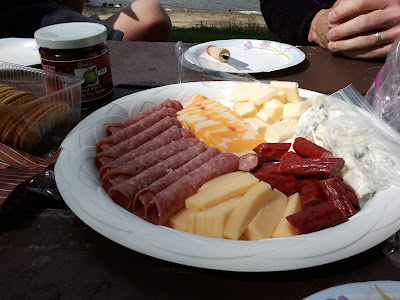 Chad wanted to walk the Potholes Trail which highlighted special rock formations that we learned about at the Nature Center on another trip this summer.  The potholes are formed by rocks spinning in water flow down the cliff and spinning smooth craters in the bedrock. In order to get to the Potholes Trail we went up the cliffs on the Balanced Rock Trail.  In essence these two trails are staircases.  Rock steps meandering up the entire way.  The entire hike was about 1.5 miles, so it was a lot of steps.  Zack had shaky legs by the end of the descent on the Potholes Trail.

One old Burley trailer and a newer bicycle camping area down the nearby bike trail lead to an overnight camping trip. Blue Mounds State Park was our destination, 7 miles by rail trail with gear in tow took close to an hour. We cheated and had dinner delivered by Jenny and Kevin, complete with s'mores. Zack and I burned the fire for awhile then played games on his iPod in the tent. The next morning we hiked to the lookout tower before breaking camp and heading home. Zack and I agreed we had a good time and would do another trip sometime.

Here are a few pictures. 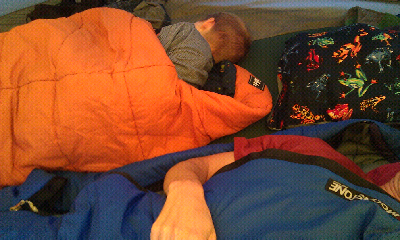 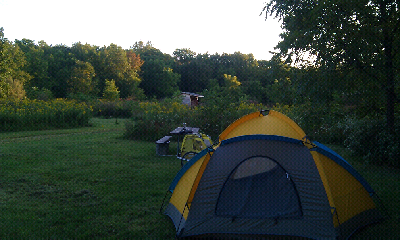 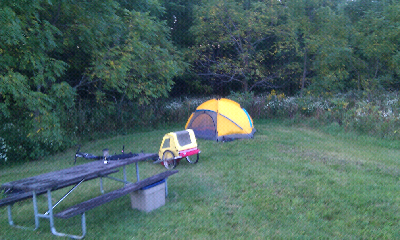 I took a ride with my friend, Chris Rupp, who is biking across the country in remembrance of those firefighters who perished on 9/11/2001.  You can check out his website:  Fire Ride Tribute 2011.  He started his ride in July in San Francisco, California.  Keeping right on schedule, he arrived in Mount Horeb on August 23rd to a huge party with many local fire departments represented.  I am super proud of Chris for committing to this ride and biking his heart out.  He was not a "biker" before the ride; most of his training was indoor over the previous winter.  He plans to get to New York tonight a couple days ahead of schedule.

When he was in the area at the end of August he had a couple of rest days in Mount Horeb before he was headed to Milwaukee.  The route that day was going to be around 125 miles.  I biked along with Chris for about 50 miles from Mount Horeb to the Trek headquarters in Waterloo, Wisconsin.  Trek helped Chris out with a bike for his cross country ride.  There were about 15 of us riding with Chris that day, one of the largest groups biking with him on his trip.  Trek served all of us lunch in their cafeteria.  The Trek chef put together the feast for the lunch stop and it was quite good.  Chris was being kept to a tight schedule due to continuous fire truck escorts planned on the route, so there was little time to look around.  I did snap several pictures while at the headquarters, and have a few from others. 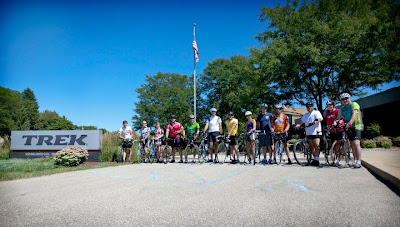 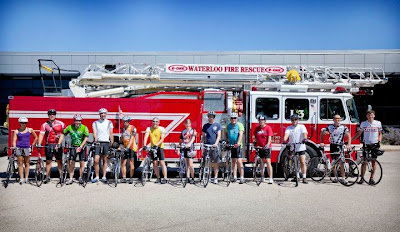