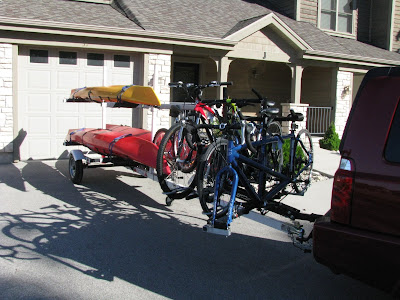 Take one Jeep Commander, three kayaks, three single bikes, a tandem and a trail-a-bike, some custom welded hitch and bike rack parts and we are ready to hit the road.

This was our first year with the tandem on the rear rack, last year it was loaded between the lower level of kayaks. That kept the width down but made it impossible to haul it without the trailer. A call to my friend whose garage looks like a metal fabrication shop and in a hours time I was loading the tandem on our Swagman XTC4 rack.

After putting it all together clearance between the bike on the trailer tongue and the bike rack was tight but final adjustment and removing my bar-ends solved that and gave room to not worry about damaging anything.

Everything is back in the garage now and we are working on a box mounted to our hitch rack to haul camping gear out west. The remainder of the year the box will see life jackets and kayak gear or snowboard gear depending on the season. The Jeep has plenty of room until you want to use the third row of seats, then don't plan on bringing much gear. The next gear hauling need is a roof rack for the snowboards, I'm hoping garage door clearance won't be an issue.
Posted by Chad at 1:01 PM